Flange washers are designed to maintain sufficient load to tighten bolts and gaskets of a flange, an electrical connection or a similar application.

These pressure washers maintain the union pre-charged with constant load, absorbing and compensanting the relaxation or dilatations joint which occur due to changes in pressure or temperature.

Installing this type of spring washers, loads remain sealed thereby preventing any leakage.
This type of spring flange washer for high or very low temperature have been designed to maintain a high load on the joints with the objective explained above.

How do I determine the bolt torque for flange conections?

The flanged fittings are an area where the spring force can be used to prevent unwanted leaks. Such unions develop a leak for a variety of reasons such as: unequal thermal expansions, relaxation of bolts and vibration. Each of these cases causes variations in original torque loads thus causing unwanted leakages.

The so called thermal collapse or thermal shock, is caused by the difference in thermal expansion or contraction because the materials have different coefficient of thermal expansion / contraction as well as different shapes and volumes, causing a portion of the set of flanges or of valves may lengthen or contract at different rates. During this heat exchange process you can cause leakage if elastic elements such as flange washers do not intervene. This way we avoid leakage during thermal variations in start, halt or normal cyclic operations typical of the workload.

100% mechanical contact, with no elasticity, can produce unwanted leaks sometimes, but in others, in an opposite way will produce high load values thereby facilitating mechanical breakage of bolts or seals / gaskets binding. Absorbing these maximum stresses, spring washers prevent breakage in joints and bolts or other rigid elements of the set.

The role of theBelleville washers on the electrical connections is to maintain sufficient preload between the bolt and nut on the connection, preventing dilation that occurs in the set due to increased temperatures.

At the junctions of the electrical connections, it is normal to use different materials in the parts of the assembly, which have different thermal expansion coefficients. This is aggravated by the fact that the connection joints endure more current, endured by the bolts and nuts, and therefore also suffer greater temperature increase.
All this leads to uneven expansion of the different materials together, which influence on the bolt and nut, forcing them to yield, making the connections loose and a certain looseness between them occurs. This looseness or lack of preload in the connections causes an increase in electrical resistance due to poor contact, resulting in an even greater increase in temperature, which likewise further aggravates the problem of the lack of stress in the press connections. The result of this effect which is retro-feeding itself can end up producing what is known as a hot spot. 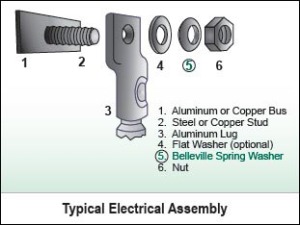 A hot spot occurs when the heat generated in an electrical connection is superior to that such a connection is able to dissipate, resulting in a catastrophic failure of the connection.

The belleville disc springs, act absorbing and counteracting the effects of thermal expansion to maintain a sufficient preload on the nuts and bolts of the joints of the electrical connections at all times.